When We Went : Early April & again in Late May Overview : A revenge rock and a cave – two things you wouldn’t be expecting    to see on a walk in the woods, but that’s exactly what you’ll find at Widow White Reserve in Lanesboro, MA.

What’s a revenge rock, you ask? Well, it’s apparently how you express yourself when you’re an scorned windbag with some mean chiselin’ skills. Meet Captain John Brown. Born in Cheshire, Brown was a hot-headed stonemason. He was leader of the Cheshire militia in the 19th century. That is until he disbanded said militia because at a meeting he wasn’t called on first to speak…just to give you an idea of what we’re dealing with here, Petty with a capital P.

Enter Susan Baker. This gal was the richest woman in Lanesboro for many years. She owned Baker’s Tavern on Greylock Road, a popular stage coach inn frequented by travelers over Brodie Mt. highway. Susan also owned a multitude of marble and wood rich acres on Potter Mountain (location of Widow White). At 81 when 69 year old John Brown came ‘a courtin’, old Sue probably couldn’t bring the hammer down fast enough! I mean, the man had 10 children for pete’s sake – if he’d been more transparent he’d be cellophane. Now I ain’t sayin’ he’s a golddigger. But yes. Yes I am.

Johnny had his pride bulldozed and instead of shooting his shot and taking it on the chin, Mr. Brown decided to go for the King’s crown of pettiness – packing his trusty chisel and a whole bag full of bruised ego, he walked from Cheshire to Lanesboro, to the edge of Susan’s property and on an errant boulder chipped away this message:

Whewww, SNAP! Can you taste the bitterness… 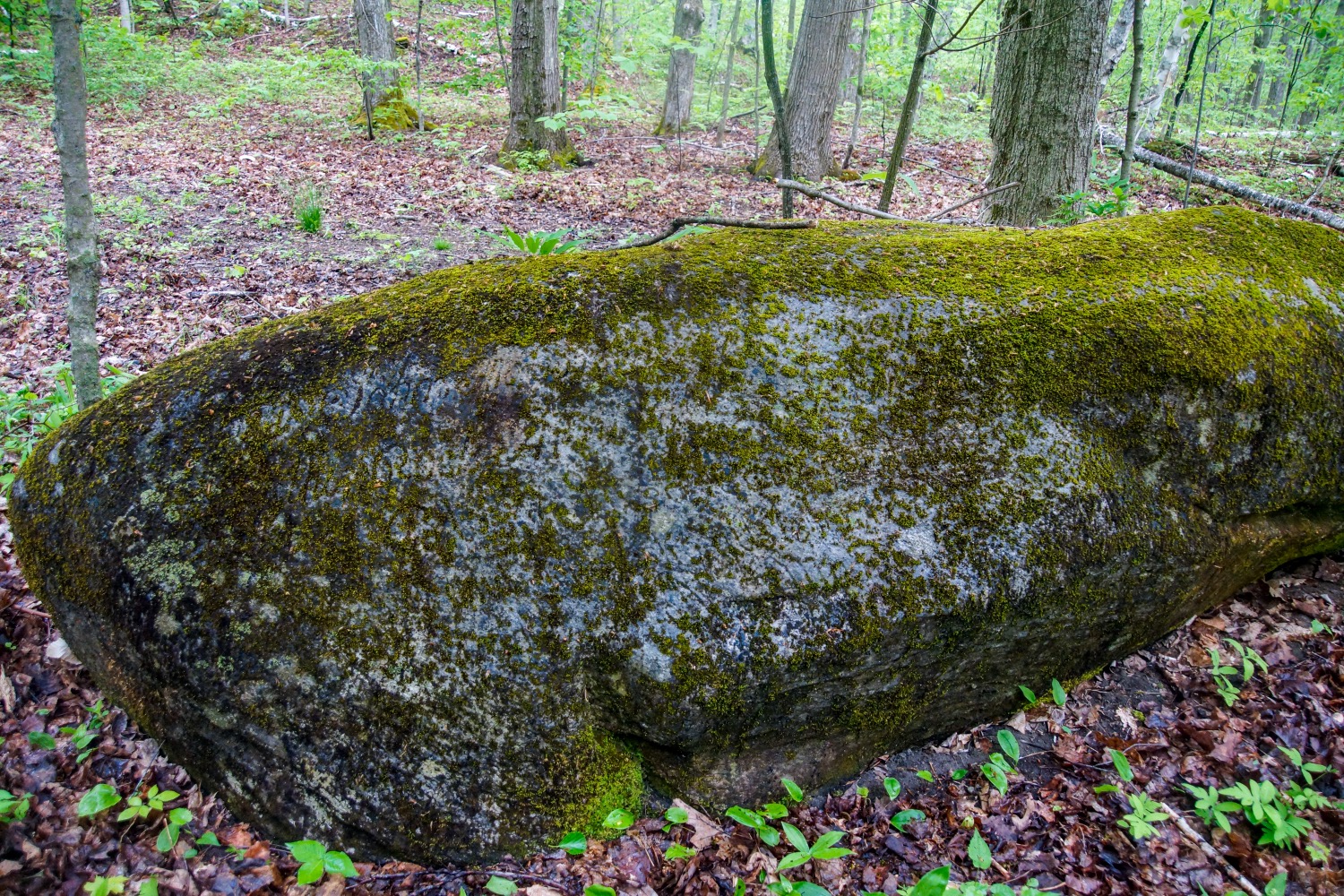 But do you know who wasn’t?

YUP.  Old John “dog with a bone” Brown, that’s who. He wrote a follow-up to his original inscription. Although he never took the opportunity to gouge it into stone for all eternity, his family saved the verse and I offer it to you now:

“Now Susan has gone to her long home. It makes me sad, it makes me mourn. What a mighty shock, when I view this rock, to know that I am still alone.”

Good call, Sue – safe to say you dodged a bullet on that one. On the uphill path to Brown’s Boulder, you’ll pass by Baker’s Quarry Cave near a stand of white birches. Named for village belle Susan Baker, this modest hole in the ground doesn’t look like much. But for a spelunker like Clay Perry, caves like this were an underground wonderland. Clay Perry was an author and journalist, a transplant from Wisconsin who moved to the Berkshires in 1912.

An avid cave crawler, Clay explored over 200 Northeastern caves, wrote three books on the subject, (“Underground New England” “New England’s Buried Treasure” and “Underground Empire”) and even coined the term “spelunker!” (Note : If anyone has a copy of one of these books, please contact me! For armchair spelunking only.) Baker’s Quarry was Perry’s favorite cave and he led many conventions here for other cave-crawling enthusiasts. The cave stretches 150-feet and has been visited since 1847 if the inscriptions carved into the walls are any indication. The cave entrance was likely discovered when marble quarrying was done on this property, remnants of which you can also find. The brook nearby is aptly named Disappearing Brook, which disappears and reappears six times over a mile stretch.

I would NOT recommend going inside the cave. Cave-crawlers and spelunkers are serious hobbyists and professionals who know the risks and the equipment needed. If you’re curious about what’s inside,  check out this video Brad Herder took of the inside in 2013. 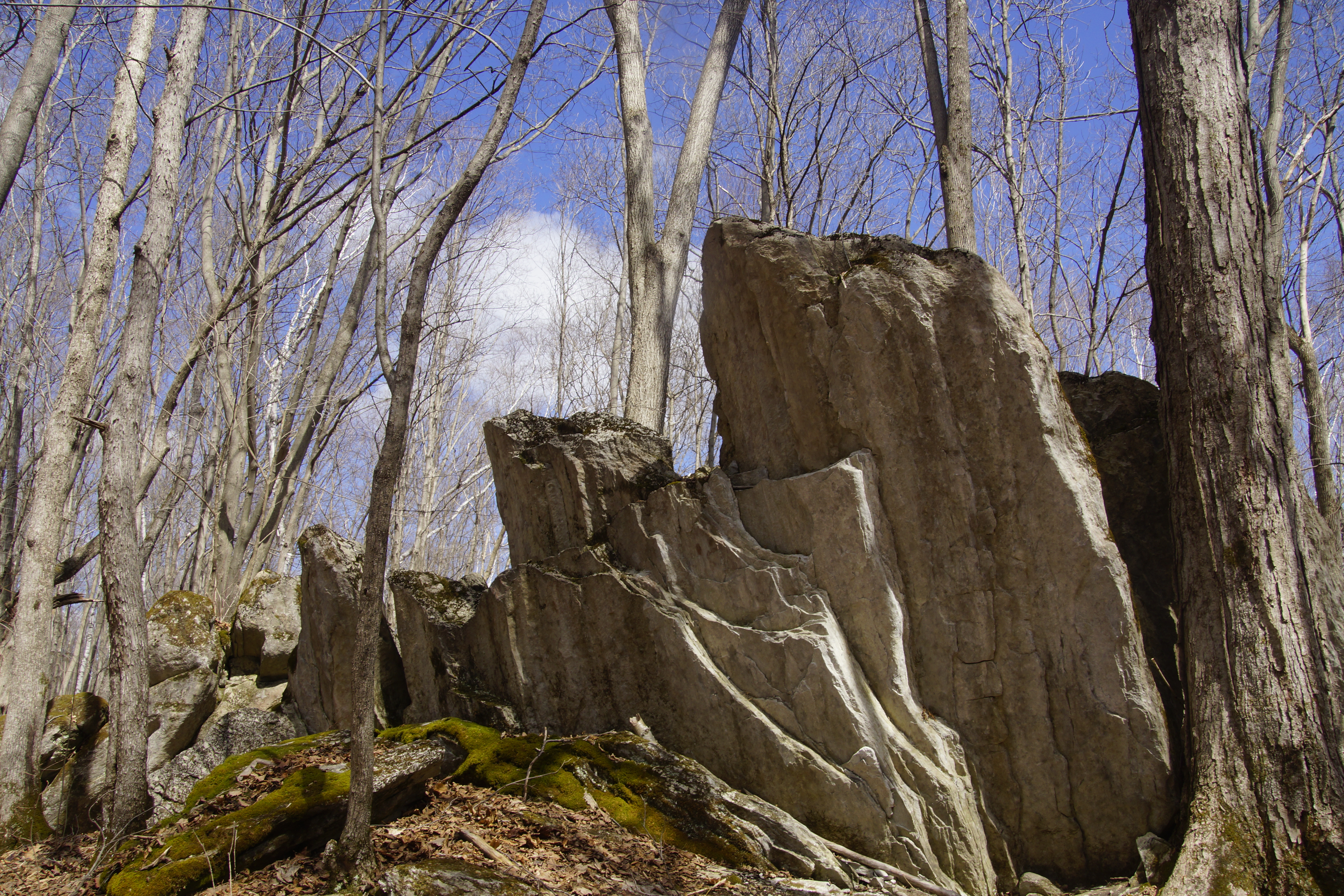 What We Dug : Would you believe that we didn’t see Brown’s Boulder or Baker Quarry Cave until our return trip? It’s true. We were on the hunt for both but somehow kept circling around the very things we were searching for. During that first trip the trees were bare and the glacier erratics stole the show. Everywhere we turned there was a bigger boulder than the last, another rock to climb, another outcrop to conquer. When we returned, we were on a mission. It was one we accomplished and truly enjoyed – who doesn’t love a good mystery hunt – but cave or no cave, Widow White is such a cool place to explore.

What We Could Do Without : The first time we visited Widow White, the trees were still budded and the forest floor was mostly clear, save for a few early spring ephemerals. What a difference a month makes! Widow White doesn’t have maintained trails but the wood roads make for easy walking.

Still, when we returned in May, it was full bore glorious spring and we found that the wood roads can get a bit lost underneath the new growth. Beyond being absolutely stunningly green everywhere you turn, it can be easy to get turned around, so please you caution, good judgment and a map.

Must Know Before You Go’s: Hunting is allowed in-season. Wear reflective clothing and take precautions. No Facilities. No Marked Trails. Silver Street is a dirt road and the parking lot is unpaved.

Directions: Widow White Reserve is accessed from an unimproved trailhead off of Silver Street.
From the center of Lanesborough: north on Route 7 to a left on Bailey Road. Follow Bailey Road north for 1.0 miles to a left on Silver Street. Follow Silver Street for 0.4 miles to the trailhead, which is at the top of a short steep hill, on a very sharp left-hand curve. Trailhead is on the right at the curve. GPS: 42.5472, -73.2520 (trailhead parking)

Scroll Through for More Pictures of our Widow White Adventure!