It’s been one year since these photos were taken.

After this hike, as we sat in the warmth of the close-quartered and crowded Harvest Barn, munching on pastries and cake, mask-free. How could we know that in a few short weeks this simple moment shared with family would be something we took completely for granted.

A year later. A year filled with over 500,000 deaths. A year of watershed moments in racial and social justice. A year of tumultuous and terrifying times for health care workers, small businesses, teachers, caregivers, uhm….everyone.

A year later and I’m 34. How? It feels like this afternoon at Diane’s Trail was 10 years ago instead of just 1 year passed by.

It’s been wearisome. I know I’m not alone feeling like it’s been 365 days spent circling the drain. Days are just…days, one bleeding into the next, seamless and opaque.

It’s also been a time of reflection. A time of holding on and letting go. I can’t say at 34 I’m an expert at either, but I do know that the only things worth holding on to are the people we love. And that letting go isn’t any easier just because life thrusts it upon you.

I find it ironic that I gave this review the title of “Calm Against Confusion,” looking back at it now, I couldn’t imagine the uncertainty that was in store.

But the theme did hold water. When all else failed, when everything else closed down, when isolation proved to be “the problem of living,” it was nature that remained. And when we were too deep in it, we got out in it.

It’s the environment of calm as against that of confusion. Always open, continuing to offer a space of much-needed respite and healing. On this day, my birthday wish is that you’ll take a moment and celebrate the greatest gift that we, as humans, have ever received.

And maybe we can all decide to treat her as such one of these days.

“Too often had the mistake been made of taking people out to the country and leaving them there in the hope that just the change of environment would work a miraculous cure. What people needed, especially people who were unhappy and depressed, was to have the country interpreted to them by showing them where they fitted into the scheme of things.”

The Gould’s were dedicated to this idea of helping people find their place in the world. Their mission was to assist others in regaining their sense of belonging and discovering their purpose. Tragically, William Gould would lose his life in service to his community, dying of a heart attack in 1925 (age 57) while fighting a fire that broke out on the farm. Agnes would carry on the torch.

This message was important to another influential figure during that time. If you’re familiar with the Appalachian Trail, you may have heard the name Benton Mackaye. How did the paths of the Monterey Goulds intersect with wilderness contemporary and father of the A.T., Mackaye? MacKaye’s sister Hazel, was a guest at the farm in 1927 after suffering a nervous breakdown. She would stay on into the 1940s and during her time there, Benton was a frequent visitor. On walks with his sister, he came to appreciate the healing nature of the Farm’s forest and natural setting.

After Will’s untimely passing, Mackaye would assist Agnes Gould on the management of the Farm’s forestland. MacKaye emphasized the forest’s value to the Gould mission,

“For purposes of psychological rehabilitation, the forest influence is uppermost. It is the environment of calm as against that of confusion. To obtain this fully on any given acreage of woodland requires keeping the forest canopy intact and letting the best trees grow to their climax in old age – I should think that an interesting forest program could be developed and made a valuable asset.“ 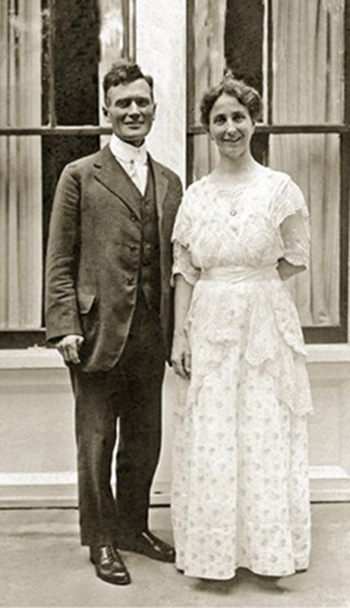 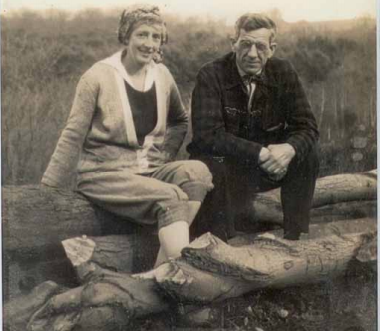 MacKaye called their unique therapeutic approach “forest mindedness,” and said, “Gould Farm is no mere ‘charity’; it is a potent social force.,”

When we revisit McKaye’s 1921 proposal for the Appalachian Trail, its similarities with the Gould Farm philosophy are striking.

MacKaye’s proposal stated that, “…oxygen in the mountain air…is a natural (and national) resource that radiates to the heavens its enormous health-giving powers…Here is a resource that could save thousands of lives.” He believed that anyone suffering from what he called, “the problem of living,” could not be cured solely by treatment but through immersion in the natural world. Speaking of those suffering, “They need acres not medicine. Thousands of acres of this mountain land should be devoted to them with whole communities planned and equipped for their cure.” Visiting Gould Farm in 1927, MacKaye must have seen this full manifestation of his dream for the A.T. – a community that revolved around reconnecting with nature, communing with others and finding one’s purpose of mind, body and soul.

“Diane’s Trail,” is named in memory of Diane Rausch, late wife of Gould Farm’s longtime Forest Director Bob Rausch. Mainly a wetland trail, this unique habitat is open to the public. If MacKaye & the Gould’s walked it today, they would surely see that their beliefs live on amongst the whispering pines. It is truly an environment of calm against confusion.

When you visit, take with you MacKaye’s intentions for the A.T. :

What We Dug: This hike happened to fall on my 33 birthday and I couldn’t have asked for a better gift. The day was chilly but the sun was shining brightly. As we walked it was easy to see why this trail is so special. A wooden footbridge runs adjacent to Konkapot River, still asleep under a thin layer of ice. A forest, composed of white pine, red-oak, and northern hardwoods, covers 500-acres of the property. The last portion of Diane’s Trail meanders alongside Rawson Brook before returning to the trailhead. The sunlight played through the trees as we did the same. We ended our afternoon with sugary, home-baked treats at the Harvest Barn, table side games and a visit with the alpacas. Birthday hikes with family are the best kind of hikes. What We Could Do Without: I had read about the interpretative trail guide and was looking forward to following along but unfortunately, there weren’t any guides at the trailhead. We still made a game out of spotting each numbered post on the trail, but it would have been great to learn more about the surrounding environment. Looking forward to returning! Keep Your Eyes Peeled For: This is a tremendous spot for bird-watching!

Must Know Before You Go’s: Parking is across the street from the trailhead. After turning off of Curtis Road, you will see the trailhead on your left. Continue up the road about 50 feet for the parking area on your right. Cross an open field to arrive at the trailhead. No trail facilities. Leashed dogs ok. No Fishing or Motorized Vehicles.

The Harvest Barn is currently closed due to the COVID-19 pandemic.

Directions: From Route US-7 S, turn left on Monument Valley Rd, Turn left onto MA-183 S/MA-23 E, continue straight onto MA-23, Turn right onto Curtis Road. Trailhead will be on the left, Parking is on the right side, 50 feet up the road.